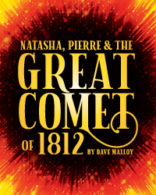 An electropop opera based on a scandalous slice of Leo Tolstoy’s
War and Peace.

SAVE 20% off the Ticket Price!

Tickets as low as $39.00
CLICK HERE for Discount Details

Hailed by Entertainment Weekly as “a stunning, blazingly original musical” and by the New York Times as “a heaven-sent fireball”, NATASHA, PIERRE & THE GREAT COMET OF 1812 is an electrifying Broadway musical. A radically contemporary adaptation of a selection of Tolstoy’s acclaimed 1868 novel ‘War and Peace’, the 12-time Tony-nominated musical brings a passionate, romantic and high-stakes 1812 Moscow to life through a groundbreaking score that mixes indie rock, pop, Russian folk, electronic dance music and classic Broadway.

Declared “The most innovative and best new musical since Hamilton (New York Times),” NATASHA, PIERRE & THE GREAT COMET OF 1812 will take over the world-renowned Winter Garden Theatre in a Canadian premiere production directed by one of Canada’s most celebrated theatre artists, Chris Abraham, and produced by two of Canada’s most acclaimed theatre companies.

"we've got your seat"

By car: From the Gardiner Expressway, take the Yonge Street exit and travel north on Yonge Street to just north of Queen Street. The Elgin and Winter Garden Theatre Centre is on the east side of Yonge Street.

By transit: Take the subway to the Queen Street Station. Walk north on Yonge Street; the Elgin and Winter Garden Theatre Centre is just north of Queen on the east side of Yonge Street

There are several public parking lots close by, including the municipal Parking lot on the south side of Queen Street, just east of Victoria Street (opposite St. Michael’s Hospital), entrance on Queen Street, and the Eaton Centre parking lot, accessible from Shuter Street.